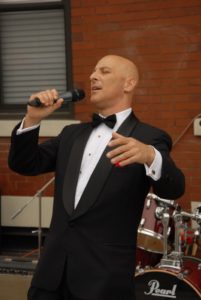 Frankie Sands has been involved in music and singing since he was in grade school. He likes to joke, ” I got my first break in 5th grade. My teacher, Mr. Derogatis was a big music buff and used to have the class do quite a bit of singing. One day I was making noise and he sent me up to the front of the class to sing Arriverdecci Roma, acapella, thinking he would embarrass me and teach me a lesson for disrupting the class. When I nailed the song I instantly became his favorite instead! After that he took me all over and had me singing everywhere for everyone!”

Frankie’s come along way since then from performing at big events like Regis Philbin’s retirement party to his induction into the prestigious “FRIARS CLUB” earlier this year.

Frank’s musical tastes were greatly influenced by his parents who were big music buffs. Frank Sr was always playing his favorite music from his youth ( the 40’s & 50’s ) which naturally included the songs of the great Frank Sinatra, Dean Martin and later, Bobby Darin. Strangely enough, when Frank was younger he didn’t care to sing Sinatra songs because they weren’t in his key. As his voice matured into the soothing baritone that it is today, Sinatra became his preferred artist.

Frankie’s show normally consist of “Vocal Impersonations” of the artist’s he pays tribute to. This fact adds a great dimension to Frank’s performances since he has the uncanny ability to sound like all three of the great singers, Frank Sinatra, Dean Martin and Bobby Darin. Freed from having to make himself up to look like any one of them, Frank becomes the quintessential ” Vocal Impersonator ” often doing all three stars in the same night! Close your eyes and you will believe that each one is on the stage when Frank Sings.

However, if “Physical Impersonation” is what you seek, Frankie also offers physical impersonations not only adding wigs to replicate the look of the artists, but even going so far as to add blue contact lenses when impersonates Frank Sinatra.

Beyond singing, Frank is an accomplished Drummer and has lead and continues to lead, his own band. He is a well rounded, multi talented performer, who lends a touch of class and elegance to any event at which he appears. His performances are not to be missed and are remembered and talked about by those who have seen them long after the curtain comes down.

Last Fall Frankie achieved a great milestone in the entertainment world when he was inducted into the world famous “Friars Club”, an organization which counts among it’s members the greatest names in show business past and present such as, Frank Sinatra, Sammy Davis Jr, Dean Martin, Don Rickles, Robert De Niro, Jim Carrey, Bob Hope, Jack Benny, etc. If you are planning an event that you want to be both special and memorable for you and your guests, contact Frankie Sands. You won’t be disappointed.